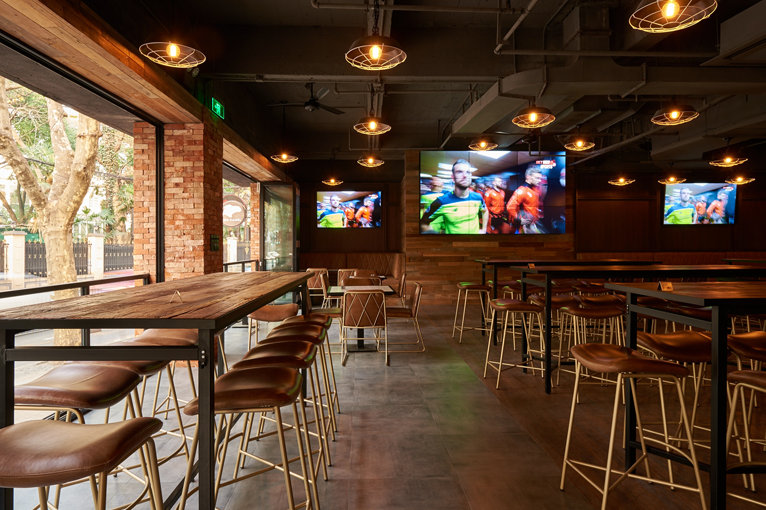 Bonus [On the Radar]: This Is What The New Camel Looks Like

By Morgan Short Dec 8, 2016 2016-12-08 Dining
When SmSh wrote about The Camel six years ago, when they first opened, we noted that it was like a sports bar for New, Young, Professional Shanghai Lads — British, American, Australian Shanghai expats heavily into the rec sports leagues around town, they brunch, they do the Brawl on the Bund, they’re in China dreaming of making it big with their own start-ups, they’ve got collared shirts on and hair that flips up in the front. And they also want to watch The Big Game on 9 million TVs in a nicer, generation 2.0 sports bar. The Camel seemed like the next stage in the evolution of the genre of “sports bar” — a step up from the traditional dingy, neighborhood sop house populated by wasted middle aged men fading away like the sports memorabilia slapped on the walls. (There was this place called The Bulldog...)

So, yeah, in addition to the cosmetic changes (more on those below) the new Camel now has 20 beers on tap, including several craft beer options — you gotta have the craft beer — and a new food menu which tips them into a higher class and price range. Their new chef did a stint at M1NT. Although the menu still offers their standard nachos, burgers, and parma, they’re also offering top-end pork belly dishes and the like. It’s nicer. It’s a “kitchen” and not a “gastro pub”. For drink, beers on tap include Karl Strauss’ Aurora Hoppyalis, Little Creature, Goose Island, Punk, Boxing Cat, in addition to a brand new cocktails list. Getting into the renovations, they’ve re-purposed the place to accommodate the newer direction. Tables are now closer to the ground and thus more conducive to actual proper meals as opposed to shoving a burger in your face while watching sports on TV. They’ve knocked down walls and opened up their three separate sections. They’ve got a heated smoking patio. The private room at the back has been redone. Overall, they’ve cleaned it up. It's entirely non-smoking.

You can no longer urinate on the television in the men’s room. (Well, you can, but you probably shouldn’t. You’d have to aim up and be pretty talented.)

And speaking to TVs, they’ve got even more — 4 new massive TV walls and 11 new 70-inch TVs. All upgraded to HD. All gigantic. Everywhere is a giant flat-screen so you don’t miss a second of sports action. People may be growing up and having babies and families and whatnot, and therefor need a nicer, non-smoking place to eat and drink in, but let's not forget that sports are the most important thing in life. Sports is why we're all here. For sports fans, The Camel is the same as it ever was. If there's sports on they're open. They show everything. If a sport is being played somewhere in the world they're open and they're showing it. They still "live for sport". Some things never change.

Opening party details: The Camel is soft open now from 4pm daily until midnight-ish usually. Their Grand Opening party is December 16. Sounds like it's going to be a rager. In addition to live music, they're giving out boatlads of free booze. To wit: 7pm to 8pm free mulled wine; 9pm to 10pm free Carlsberg; midnight free tequila. They've also got free menu samplers from the aforementioned new chef Mark Beckwith throughout the night. Details here.