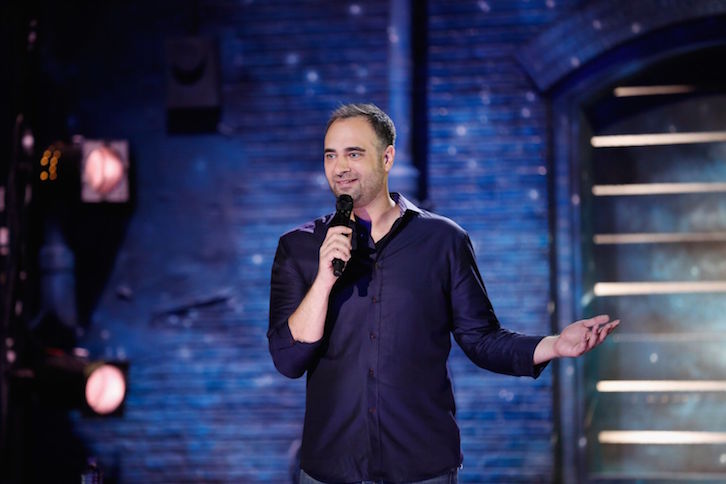 By XZ Palmer Dec 13, 2016 2016-12-13 Nightlife
You may know Kurt Metzger for his role as an opinionated nihilist on Louie CK's Horace and Pete, as a well known stand-up comic in the New York scene, or for his writing work on Inside Amy Schumer and Chappelle Show. You might also know him for his controversial comments that made headlines back in August, which comes up as the number #1 result if you Google 'Kurt Metzger'. He's in Shanghai this week for shows on Friday and Saturday at the Kung Fu Komedy Club, who are calling him their biggest international booking.

I caught up with Kurt ahead of his show. He was a bit abrasive, but also humble, and seriously funny. We talked about American media, acting, and comedy. Read the full interview inside.

Kurt: Oh my god, oh yeah I had a whole shit storm dude. Let me tell you something man, I never even DREAMED that you could have the entire media basically spending a day talking about you and have them investigating your girlfriend's family and shit. I didn't see anything like that coming from a dumb-ass Facebook post, I'll tell you that right now.

[My post] was a word for word mocking with a person I was arguing with. I'm not taking [into] account that everyone is just looking at me. My dumb-ass is thinking everyone is following this conversation I'm having with another person. I didn't realize no one would speak to me at all before there's a whole fucking thing.

I think we need less of that, unless you want more Trump. If you want to know how a nitwit like that got elected, that's how. That insanity online is doing more damage that people even think.

SmSh: Has that experience changed how you voice your opinions or your comedy?

Kurt: What I realize is I was out here flailing with people thinking that they want to have some type of [debate]. On my podcast Race Wars we invite everyone on. That's the thing that's going away. People want to be in a click. It's all in-group out-group. Everybody. It's pure stupidity dude. I just wasted so much effort on it. So I'm going on tour now because I should have been on the road instead of dicking around on social media. I'm not going to put my thoughts on Facebook for free for dishonest people and thats their thing to judge. Like what am I doing?

SmSh: What first drew you to comedy?

Kurt: I don't know man, abusive backgrounds? [Laughs.] I don’t know man. When I was a kid, I used to watch it. I liked it. I grew up a Jehovah’s Witness so I had to knock on doors and shit. Technically, I was a minister when I was young, but I didn't have a divinity doctorate or something. I would say comedy is similar to the knocking on doors part, not the giving talks in church where everyone loved me. That doesn't really teach you how to deal with drunks. I mean that's a lot of the job. Between me and the waiter and the bouncer, we're all in the business of dealing with drunks.

SmSh: How did you get involved with Horace & Pete?

Kurt: Louie just asked me man. He happened to see me at the cellar and he asked me. You know he based it on people he knows here and there and he thought of this character while he saw me there. I just happened to fit with his vision and I just happened to be this thing he wanted.

He's been a really good guy to me. He just asked me. He gave me the premise and I said yeah yeah I'll do it. He asked me to come over to his house and Jessica Lange is at his house. I mean it was crazy. It was this thing with these real actors to do a read through. Most of the stress was of me being late for stuff. I'm just perpetually tardy. That was the only tension. As far as being on the set, it was being in a dream.

I haven't done much acting. I've done a little bit of sketch here and there and normally you do a bunch of takes. And on this we only did three takes and he was like just get it right because we're going with it.

I didn't realize how much of it depends on the other actors, because standup is such a solitary job.

SmSh: Why do you think comics go into acting and was it easy to do?

Kurt: I think it's easier for a comic to go into acting than an actor to go into comedy. I don't think it's easy to act, but he [Louie CK] thought of a character based on me, who's name is my name. I better be able to pull that off reasonably well [laughs].

Kurt Metzger performs at 9pm on Friday and 8pm and 10pm on Saturday at the Kung Fu Komedy Club.