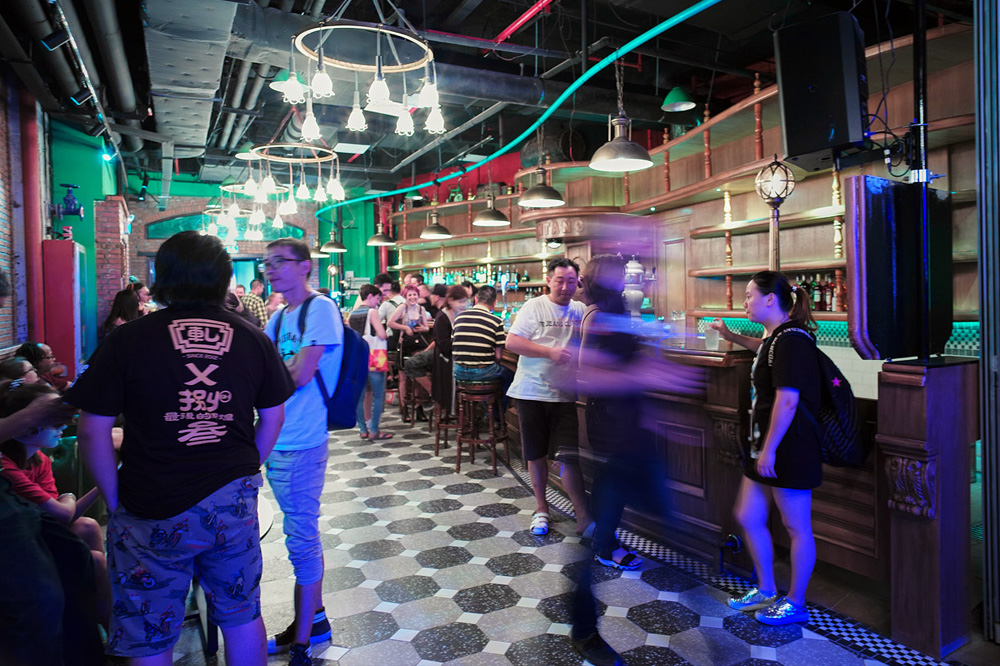 By Alex Panayotopoulos Aug 24, 2018 2018-08-24 Nightlife
Technically the newest addition to the burgeoning Yuyintang empire has been open since back in like May, for a couple shows where they didn't even peel the film off the glass, but with Saturday as their official opening night, we can finally say that Yuyintang Park is definitely 100% absolutely certainly without doubt probably just about ready for primetime. The quick-take! 1) It's in the basement of a mini-mall. 2) It's bigger, louder and has a pub. 3) It's run by familiar titans of the nightlife scene. Towering, leathery-skinned personalities. Dinosaurs. Zing! Got 'em. Impressions and details after the jump.

Crouched in the basement of a new Zhongshan Park mini-mall like fifteen minutes from the original , and brought to you by the same god-lizards responsible for Specters, Yuyintang Park is 50% British pub (complete with darts), 50% live-house. Also, concrete patio for smokers. The former dovetails with their stated goal of making it a place to drink even if there isn't a show on. They're even threatening charcuterie. Charcuterie is nice. Pubs are nice. Pubs with live music are nice. The latter is said to hold 500 people squeezed in cheek to armpit. The rogue's gallery in charge of the soundsystem, which looms menacingly over the audience, say it's probably the best in China bruh. Good thing this went into a mall, lest the neighbors swiftly develop a taste for (quoting my dog-eared press release here), "basically all genres of live music – from Japanese post-rock, to Beijing metal, to LA bedroom electronica, to Mongolian folk, to local punk rock." Saturday's (freeeee) show features homegrown talents Absolute Purity, Double and The Founders, while the ticket for the rest of August and September see the likes of Intervals (Sep 15) and Bonzai Boulevard (Sep 23). They've also managed to wrangle themselves a live theater license! That means even if there isn't a show on, there could be plays, readings, poetry slams, improv comedy, cock fights, leather bondage workshops, vape-trick demonstrations, art shows, magic tricks, vinyl frisbee games (Uptown Records is present) and ramen-eating competitions. Yuyintang Park! It's whatever you want it to be, so long as you want it to be a pub with a stage and a bitchin' sound system.